AWS Ocean Energy are very active in the field of research and development. Our involvement ranges from concept development and testing, to scale model development and  control environment testing across a range of exciting areas. Some of our recent projects are included below.

In January 2019, AWS were awarded a contract by Wave Energy Scotland to design, build and test a half scale Waveswing wave energy converter.  With support from subcontractors Quoceant, 4c Engineering, Sequentec, Pelagic Innovations, Uaine Gorm, Orcades Marine, Green Marine and K2Management the FEED design completed at NWEC2 was reviewed and updated where required.

Fabrication and assembly is currently underway at Malin Marine in Renfrew where the structural steel fabrications are now being assembled with the device subsystems prior to a period of factory testing.

On completion of the factory testing, the device will be transported to Orkney where it will be deployed for open water testing at EMEC. This testing will demonstrate the marine operations associated with the device including tow trials, installation, removal, operations and maintenance.

This project has been supported by Wave Energy Scotland and by EMEC’s OceanDEMO project. 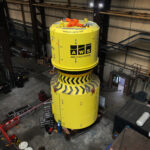 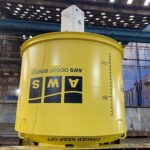 Bench testing of the PTO Cylinder of the Waveswing has been successfully completed, with three primary hull elements then being moved to Malin Group’s new 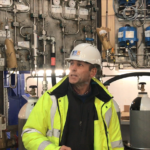 This week saw AWS controls and electrical engineers begin the commissioning of the internal subsystems of the prototype Waveswing.  This is a crucial and exciting

Following the semi-final 1:50 scale trials and numerous technical submissions, team Waveswing America was selected as one of only 9 teams to progress to the finals of the wave energy prize.

The requirements of the finals were to build a 1:20 scale model and submit this for testing at the US Navy’s large ocean test basin at Carderock, MD.

The team attended Carderock in August 2016 where we were allowed one week to assemble and pre-commission the model in the ‘parking lot’ before moving into the basin itself. Once in the basin we successfully tested our model which included a full linear generator PTO and advanced control system.

The picture on the left shows the anchor frame and air reservoir portion of the device. The reservoir is only required at model scale to compensate for air comprehensibility effects.

A key feature of the Waveswing is the dynamic response to waves across a wide range of sizes and periods. This is due to the fact that the device responds to pressure caused by passing waves rather than the inertia (diffraction) effects.

When this feature is combined with a direct drive PTO and smart control software, very high levels of power capture are possible, even with a small device in long wave-lengths. This results in best-in-class volume utilisation and hence lower costs. 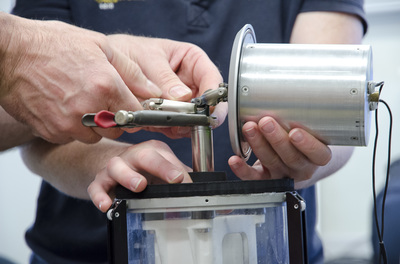 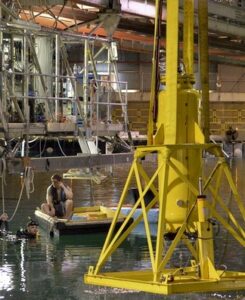 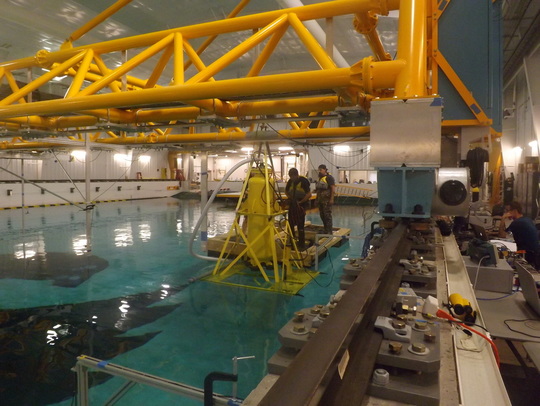 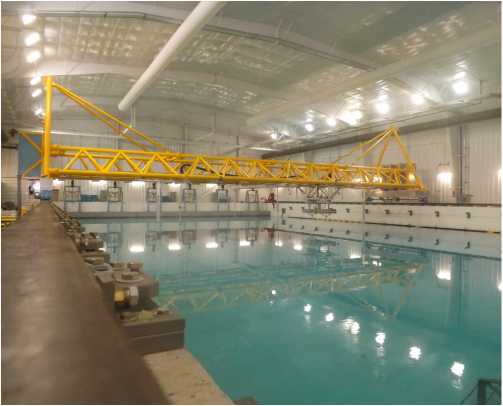 The first stage of the competition involved 1:50 scale model testing which ​The Wave Energy Prize sponsored by the U.S. Department of Energy is a competition in which the objective is to double the economic performance of wave energy converters from a current baseline of 1.5m of effective capture width per $million of structure cost.

When the competition was announced we believed that both the AWS-III and the Waveswing were capable of achieving the objective so we teamed up with American partners to enter two teams. Surprisingly both teams were successful in reaching the semi-finals (from an initial field of 92 entrants).

After much soul-searching we decided to withdraw the AWS-III bid and to focus resources on team Waveswing America! The 1:50 model was challenging due to the small scale and the requirement to provide accurate measurement of both dynamic and kinematic components of power. We made extensive use of 3D printing and acrylic tube and produced an excellent model. The PTO used was a minature glass cylinder damper with graphite piston and precision air-jet control.

The second stage in the competition involved a larger 1:20 scale model with full reactive control. We returned to Iowa in June to test and shake-down the model before packing it up to go to Carderock for the final testing.

​AWS were proud to be contracted to Wave Energy Scotland for the development of the advanced Archimedes Waveswing. Although development of the Waveswing has been ongoing for nearly 20 years, recent advances have transformed the economic prospects for the device. The Wave Energy Scotland project has allowed us to examine these advances in detail and to re-confirm the business case for the advanced Waveswing. 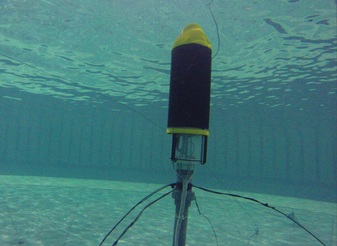 ​In November 2014, AWS completed the large scale installation of a single AWS-III power generating cassette at Lyness quay, Orkney. The purpose of the test was to demonstrate one large scale AWS-III wave energy absorber (a “cassette”) in a real sea environment.
The test included the design, fabrication, transportation, assembly, commissioning and operation of a single, large scale cassette mounted on a concrete barge at Lyness.

​During the project, the team gathered information on many aspects of the technology including optimum materials, manufacturing techniques, packing and handling of novel components and durability of components in the marine environment. Hands on experience of large scale marine operations helped inform optimised designs of the full scale 4MW AWS-III wave energy device.

We also gained valuable information on the environmental impact of our technology-including noise and vibration monitoring. Underwater video cameras showed fish were using the absorber as an artificial reef and were grazing on it.

Results from the tests have been very positive and will inform the next stage of our technology development plan-making wave energy technology commercially viable.

In November and December of 2011, the team at AWS designed and built a 1:15 scale model of the AWS-III dodecagon for tank testing in a controlled environment. In late December 2011, the model was shipped to MARIN in the Netherlands for the test campaign to begin. The purpose of this was to validate numerical models- projecting device performance. Information from these tests was also used to optimise the device, to enhance the design further resulting in more power being generated.

In summer of 2010, the AWS team designed, built, launched, operated and maintained a scale model of the AWS-III technology in Loch Ness, Scotland. The purpose of the tests was to prove the AWS-III concept, prior to developing a much more scientific model for testing in a controlled environment. The tests were successful and during the test programme we experienced a range of wave conditions. You can see video footage of the tests here.

​In September 2014, AWS started work on an “Intelligent Active Mooring System” to help reduce the mooring costs of marine energy technologies by mitigation of peak loads in mooring systems.
The project proposes development of an innovative technology under the Innovate UK Offshore Infrastructures theme of Support Structures by a collaborative team engaging a company and technology from outside the offshore renewables sector. The key aim of this project is to further develop a technology which will significantly reduce the cost of mooring wave, tidal and floating wind installations through mooring load control and subsequent reduction of structural loads on a floating device. The components have already been tested and proven but require modification for application within the marine renewables industry.
Menu

WHERE TO FIND US